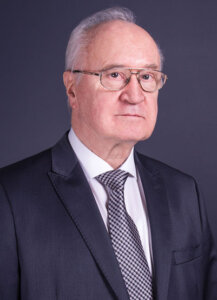 Rudolf Bryś was entered into the list of the Bar Association in Katowice in 1977.

In 1967, he completed legal studies at the University of Wroclaw; in 1970, he completed the Postgraduate Studies in Foreign Trade at the School of Economics in Katowice; in 1971, he passed his judge’s examination, and bar examination in 1976. In the years 1977-1995, he worked as an attorney in the Bar Association in Dąbrowa Górnicza, the head of which he became in 1990. Rudolf has been running his own office since 1994.

He has an extensive knowledge and experience in the field of the Polish and international civil law; Rudolf is also fluent in German in the scope of professional and colloquial vocabulary, which allows him to participate in court proceedings in this area of law (he took part in civil cases conducted in German courts). He specialises in matters related to claims for compensation in traffic accidents. Rudolf has been the exclusive partner of one of the largest European companies operating on the international market of claims adjustment for Poland.

He speaks German fluently (in 1968, he passed the state examination in German, organised by the Ministry of Foreign Trade).